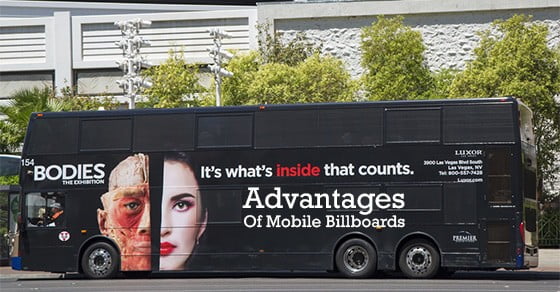 Mobile billboard advertising is usually placed on the side of a truck or bus. The idea behind it is to advertise to all of those that may pass the vehicle. This is different than standstill billboard advertising and can be quite effective. There are many reasons why businesses decide to purchase mobile advertising, and the pros can highly outweigh the cons.

Grassroots Advertising’s mobile billboards have the added advantage of being dedicated advertising vehicles.  Your message will travel on strategic routes designed to get in front of your desired audience.  The vehicles can also get huge numbers by getting in front of sporting event venues, concerts, and anywhere else a crowd gathers.

How to Create a Mobile Billboard

Before you begin calling around for mobile advertising, consider what you want the ad to say. One of the only pitfalls with such advertising is that the message you are portraying must be clear and concise at a glance, which can be difficult. You can’t give a long drawn out message on the side of a moving vehicle, as not many will be able to read it all. The shorter the message the better.

Since the billboards are in motion, you will want large text and appealing images. The colors should stand out so that people want to pay attention to what the vehicle is trying to advertise. Make sure that you create an eye popping advertisement that is straight to the point and that clearly represents your brand.