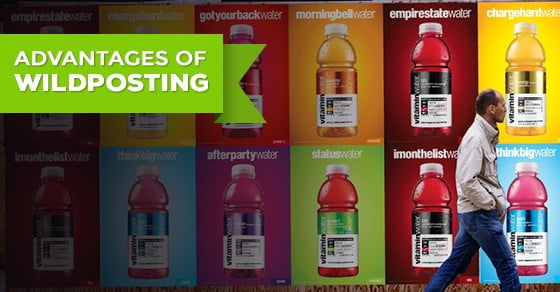 Wild posting is a form of advertising that has been increasingly gaining attention over the last half-decade and while you may not know it, chances are you’ve been exposed to it in downtown areas or entertainment districts around your town.

So what is it? Wildposting is what they call many of the same, or similar, posters put together as a collage on a street – level wall or building. Usually these walls must be rented for the sole purpose of advertisement.

However wildposting isn’t just a way to advertise to your local crowd. If you go through Grassroots Advertising, you can advertise in Toronto, Montreal, Vancouver, Edmonton, Calgary, Winnipeg, Halifax, Quebec City, Ottawa, and major cities where wildposting is legal and beneficial to your business.

Although most people don’t readily know what wildposting is, those who live in large metropolises have no doubt been successfully exposed to this kind of branding. But what can this really do for your business? How does wildposting work?

Wildposting is definitely a great way to make a statement. The simple fact that wildposting is created with nothing more than paper posters makes it much less costly than other forms of advertisement, yet it still reaches a large enough audience and makes a clear statement.

For more advice on how to throw a killer wildposting campaign, connect with the Grassroots team today!