Inspiring Chalk Art From Around The World 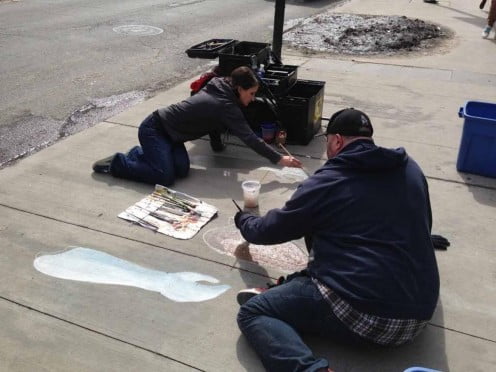 Nothing grabs the attention of a passersby like artistically rendered chalk art. Chalk art can be eye-catching and can take on added importance if tied into a marketing campaign because it can catch passersby off guard.

Here are some examples of the more interesting ways chalk art has been used around the world. Prepare to be amazed!

Created in Germany, the Hot River chalk art is definitely an example of a creative artist pulling out all the stops. For one thing, the artist employs almost an entire street to create the masterful artistic render, which is a two-dimensional drawing that, looked at from the right angle, looks like a three-dimensional picture of a city street that has been split apart by a huge, gaping sinkhole. In this apocalyptic drawing, there is not only water in the sinkhole, but also fiery flames.

Drawn on the pavement adjacent to an eatery, the Jump Into Summer With Somersby Apple Cider chalk art definitely achieves its purpose by bringing attention to the Somersby brand. The artistic rendering shows a large outline of an apple. What’s unique about it? The way the picture is drawn gives the impression that there is a body of water inside of the outline of the apple — almost like a hole filled with water simply opens up in the pavement. In the heat of summer, passersby couldn’t resist the urge to dip their toes into the water.

Created in Hong Kong, the Shark chalk art draws quite the crowd. Produced upon a canvas of brick, the artistic rendering makes it appear as though a shark, with its mouth opened wide to reveal menacing teeth, has emerged from a large crater filled with water. It looks as though someone who gets too close might actually slip and fall into the water — only to have to contend with a shark.

Done right, chalk art can really draw a crowd, and advertisers and marketers who can find a way to skillfully tie it into their own campaigns can increase awareness that can lead to higher sales.