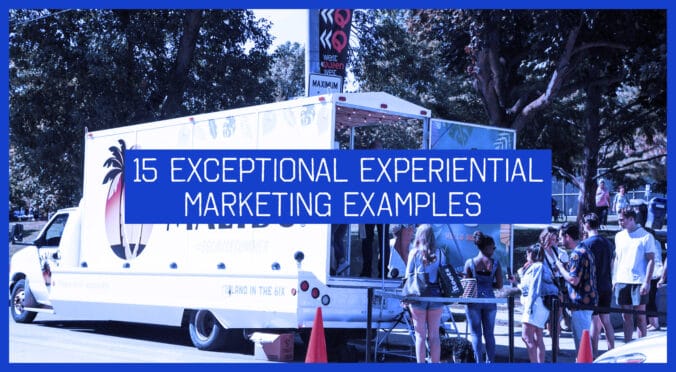 Experiential marketing sparks emotions, feelings, and senses. At Grassroots Advertising, we have the ability to launch campaigns that target all five senses. We have been bringing brands to life for over 35 years. Here are 15 exceptional experiential marketing examples that we have launched… 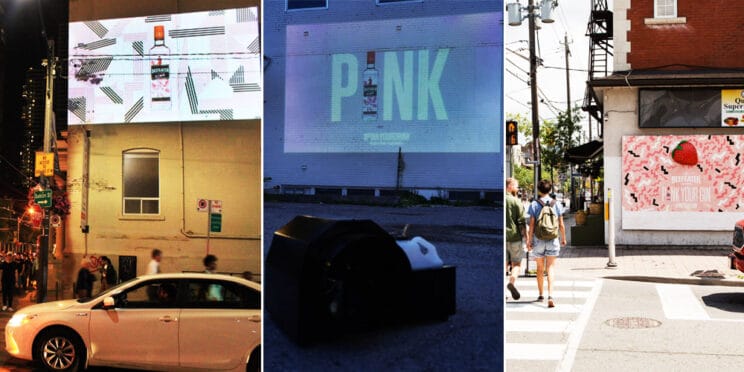 To promote the strawberry flavored gin, Beefeater Pink, projections were combined with a strawberry-spraying scent canon to create an immersive sensory experience. We positioned the scent canon in a parking lot and people would walk by the projections and instantly smell a strawberry scent that was impossible to ignore. To increase exposure and buzz, we also put up massive Beefeater Pink posters with 3D strawberries attached to them throughout Toronto. 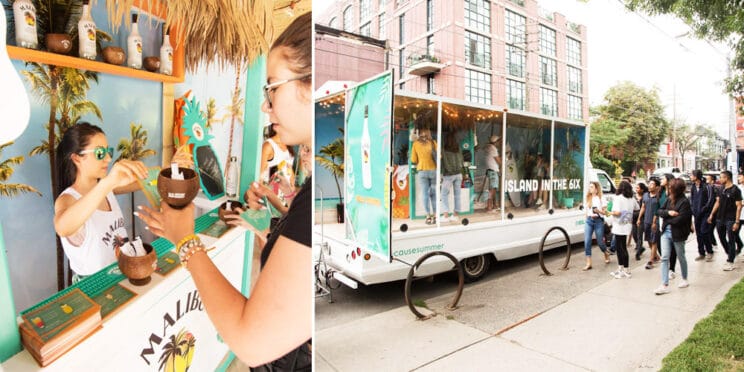 We transformed our display truck into a mobile bar to boost Malibu Rum. The truck had a bamboo roof, beach sand, surfboards, towels, a giant swing, and of a course Tiki Bar. Pedestrians also had the opportunity to take pictures with a creative photo wall and post the photos to their Instagram featuring the event’s hashtag #becausesummer.

We drove and parked the Island in the 6ix at popular Toronto hangouts. Street Teams also handed out branded swag along with mini bottles of Malibu Rum.

The Malibu Rum experiential marketing campaign was a unique pop-up interaction where people experienced a Tiki Bar and Malibu Rum samples. To help further increase reach and exposure, Malibu Rum utilized a branded event hashtag that people could use to share their experiences on social media. 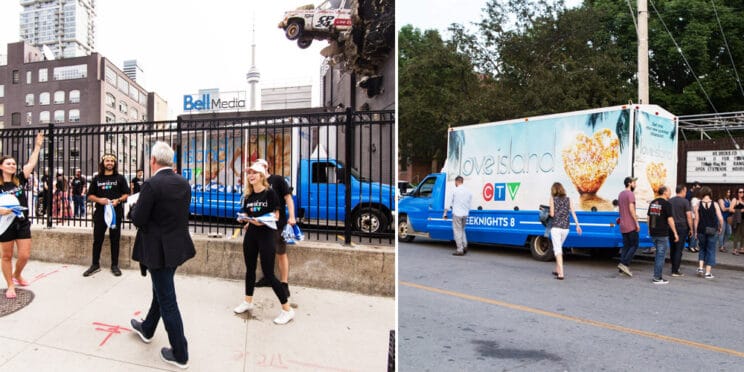 To kick-off Love Island airing in North America, our decorated display truck toured Toronto with Brand Ambassadors. The Street Teams handed out branded beach balls to pedestrians while endorsing the TV show. Beach balls were the perfect swag to represent the show since it took place on an island.

Tourisme Montréal launched their Never Grow Up campaign to advertise the city’s exhilarating and youthful environment with the anticipation of attracting more people to visit Montreal. We helped bring the campaign to life by providing Brand Ambassadors who rode around popular locations in Toronto’s downtown core on bicycles with monkey lights installed in the wheels for extra creative impact. The monkey lights were animations of various symbols that were representative of Montreal. The Street Teams also wore branded Tourisme Montréal t-shirts and raincoats.

We launched an exciting projection campaign to promote Corona. People had the opportunity to sing karaoke with their friends while being projected on city walls throughout Canada. Plus, they received branded swag such as Corona T-Shirts.

Corona provided its customers with an extremely unique experience because it’s not often when people have a chance to be projected on a wall while singing. This memorable campaign lead to word of mouth marketing and participants sharing their experiences on social media.

Molson had some fun with their customers by playing a friendly game of “truth and dare” minus the truth. Participants had to push a giant button then act out the projected dare to win a cider king can. The dares were all video tapped and uploaded to social media. Molson successfully created a memorable brand experience that participants were thrilled to share with others online and offline.

Toyota brought test-drives to a whole new level. Pedestrians had a chance to play a Toyota car racing game that was projected on city walls. We used chromakey to project the players into the Toyota creative. Users drove a corolla on the screen, and they could choose between a pinball or mountain drive course.

Toyota created a fun, memorable and creative test-drive experience that will definitely stick out from other test-drives. Plus, this experiential experience connected exceptionally well with Toyota’s brand.

TIFF/ET launched an experiential projection campaign that made all pedestrians feel like movie stars. Brand ambassadors acted like paparazzi and took pictures of passersby posing on the red carpet. The pictures were then streamed to the projections and uploaded to their microsite.

Heineken made a dreaded bar lineup a lot more entertaining. To promote Heineken, a branded display truck with dancing ambassadors and a DJ parked in front of popular downtown nightclubs. The ambassadors interacted with people walking by and waiting to get into nightclubs.

The Heineken display truck was a huge success since Heineken brought the party to their target audience and the campaign aligned seamlessly with Heineken’s brand.

To boost Sapporo, we integrated projections with sensors to turn participants into a Sumo, Geisha or Samurai. Users would make various movements to control their projected character. Videos of the campaign were uploaded to the Sapporo Fakebook page and shared by participants.

We launched an experiential marketing campaign for Holt Renfrew where everyone was a winner. Our display truck was transformed into a Holt Renfrew game ground. Brand Ambassadors invited the public onto the truck and instructed them to choose a key that unlocked one of the three boxes. Each box contained a different Holt Renfrew item that people could take home with them.

Ultimately, everyone who partook in the game desired to win Holt Renfrew items. This stimulating event promoted multiple Holt Renfrew products while giving people a chance to try them out. 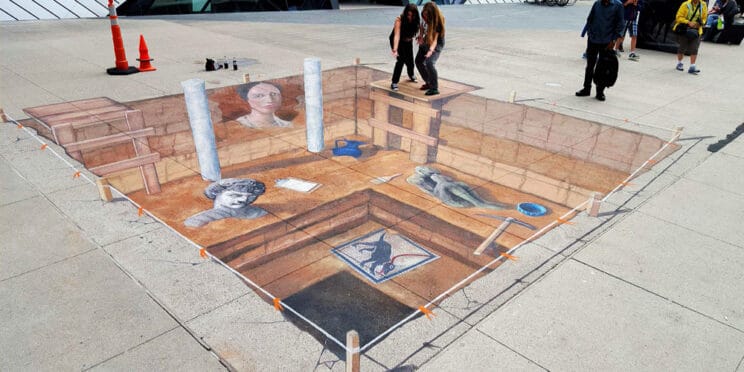 In an experiential marketing campaign, we launched for Royal Ontario Museum, the public had the chance to experience an exhibit on the street. A massive 3D chalk art exhibit was illustrated in front of the ROM to lure people in. The chalk art snatched attention since people are used to staring at plain pavement below them. The ROM exhibit also allowed for great photo opportunities.

To raise awareness about recycling rules, a branded Stewardship truck handed out iPads to play their recycling-themed game while serving ice-cream. The game helped increase people’s understanding of recycling and the ice-cream made it that much more enjoyable. 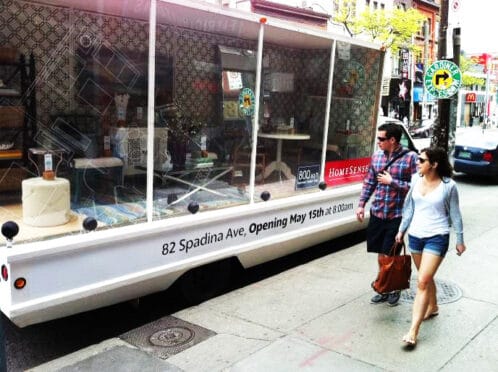 To showcase HomeSense, our display truck was refurnished with HomeSense products. The truck drove around and parked in high traffic areas. Pedestrians got a chance to see the products in action and could visual how the furniture would look.