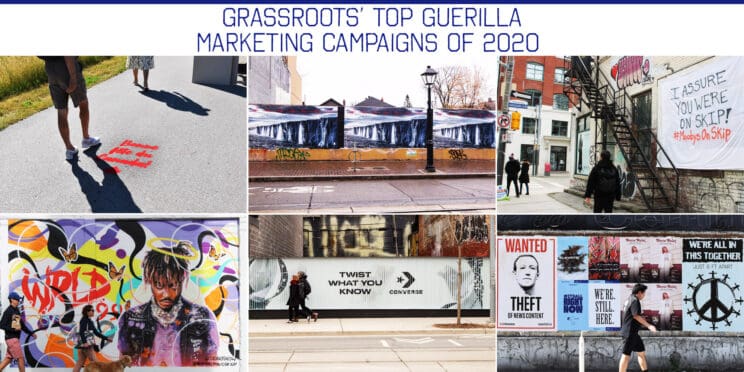 For over 35 years, we have been launching guerilla marketing campaigns and bringing visions to life. Guerilla marketing creates lasting memories, connections and relationships. It’s unique, bold, edgy, thrilling and personable.

As 2020 is coming to an end, it’s time to acknowledge our top guerilla marketing campaigns…

To announce the release of Pearl Jam’s first album in 7 years, we helped launch a wildposting campaign which incorporated augmented reality.

The Pearl Jam website displayed a world map with pins of the exact locations of their gigantic waterfall wildpostings in 11 different countries. There was also a message prompting fans to visit the nearest location. Once fans arrived, there was a link to activate an AR lens through either Facebook or Instagram.

If users pointed their phone lens towards the wildpostings while utilizing the filter, the waterfalls in the postings began to flow and the band’s name appeared at the top in what usually looked like a simple red line. Users then had the option of taking a video of the waterfalls then posting it their Instagram or Facebook story.

We were ecstatic to run the Toronto wildposting campaign for Pearl Jam at College and Rusholme. Pearl Jam effectively launched an engaging and interactive worldwide campaign that not only included augmented reality but also tied to social media.

To help promote the Mooby’s pop-up, we hung Clerks-inspired banners all over the downtown core to encourage Torontonians to go to SkipTheDishes and enjoy an utterly delicious dinner. Mooby’s is a fictional fast-food joint featured in some of Kevin Smith’s movies such as Clerks 2 and Dogma.

We launched a 3D wall for Converse Twisted at Queen and Peter in Toronto. The message and image on the wall would change, depending on the angle that people were viewing the wall.

If you’d like to see the Converse Wall twist, watch… 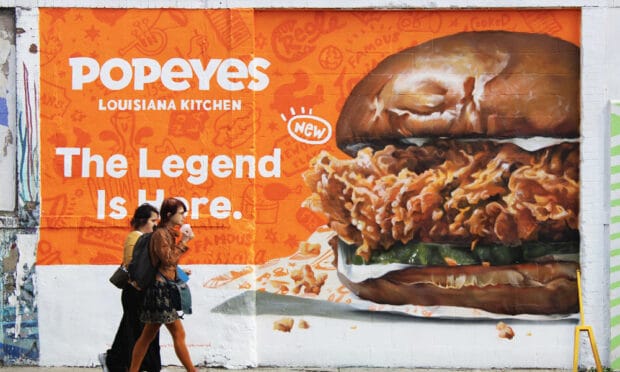 To boost Popeyes, a massive mural was painted at 21 Ossington in Toronto. The Popeyes mural stopped traffic while adding charm to Queen W/Ossington area. To see how this striking mural came about, watch our exciting video below…

To celebrate the restoring of Molson Export as the official beer of the Montreal Canadiens, we hung Tear-Away wildpostings throughout Montreal. People could rip off and take a Montreal Canadiens poster home with them. There were 4 poster creatives to choose from and each poster highlighted essential team moments.

Together Even When We’re Apart Guerilla Marketing Campaign

We collaborated with Partial Gallery and Labour Of Love to launch Together Even When We’re Apart. The inspirational initiative beautified the Toronto streets and connected local artists with local businesses.

To boost Utopia, we launched a 3D lenticular wall. Utopia was a new television series that was released on Amazon Prime on September 25th which aligned with the start date of the 3D wall campaign.

To celebrate Canada Day and promote togetherness, we installed stencils throughout Downsview Park.

The Bentway launched ItsAllRightNow which was a public art project capturing the various experiences and perspectives of COVID-19. To promote ItsAllRightNow, we ran 3 unique and creative wildposting flights during the summer.

We hope everyone has a happy and safe New Year and we are looking forward to all the unique campaigns that 2021 could hold!